Sr Ann Kelly Abbess address at the Funeral Service of 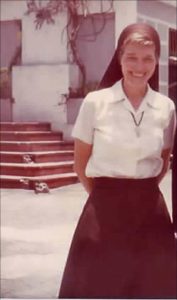 usto over a month ago, on November 30, 2018, our beloved Sister Jean Ryan was called home to a much deserved rest.  On December 28, the feast of the Holy Innocents, Sister Anselm Gunn answered the call to her eternal home.

The passing of these two great ladies marked the end of a very special time in the history of the Central American Region, the end of the foundational epoch…they were the first, and they had done what was theirs to do.  They shaped the region, and gave it direction.

Anselma arrived in Salvador in December 1972, with Fr. Gerry Moore, ofm.  She was there for the duration of the civil was which raged from 1980 to 1992 and claimed over 75,000 lives.  She witnessed first-hand the terrible conditions and structural injustices which caused that war.  She lived in Morazán, one of the poorest of the 14 Departments or counties.

She fought for education, health, justice and peace, but not from the side-lines.

The team of friars, sisters and laypeople in Got era began a program of conscientization, helping to bring to peoples’ consciousness what they already knew.  That it was no part of God’s plan for a people to live in poverty, marginalized and ignorant, whose hard work could not support them or their families in any kind of dignity.  A people whose lands were taken away from them, leaving them victims of unjust structures and undeserved suffering.  They were denied the dignity that belongs to those created in the image and likeness of God.

As the people learned to analyse their situation, they saw that it had to be remedied.  One man remarked: “We learned to lift up our heads and realize who we are.”  This awareness was growing all over the country.

This awakening did not find favour with the authorities.  One official had the temerity to tell Anselm that the people were lazy and would not work for the $6 dollars a day building roads under the hot sun.  “Wouldn’t this be better than lying in a hammock all day?  Anselm quickly sorted him out and explained that if you lie in a hammock all day you do not need much food, or shoes, or adequate clothing, or transport to and from work. …and that salary would not feed or house the children.  Also, inadequate and slave wages were insulting and useless.

She recognised the qualities of her people and their love of their families and the land.

The brutality increased…and Anselm was there when the organizations went around in the morning and found the bodies thrown on the rubbish dumps by the death squads.

She had the sheer audacity to go to the military authorities and protest the captures and murders. She actually put the fear of God into some of the military officers.

Classes for the catechists were banned, the agricultural projects were stopped, (they were accused of digging trenches with the shovels and spades they had).            But classes did go on, and the Bible came alive.  The suffering Christ was in the people…it was no longer an account of long ago happenings.  Some of the catechists took to the hills and joined the struggle, often taking the names of prophets as pseudonyms.  If they armed, they could not continue as catechists even though their faith impelled them to join the struggle.  Most stayed with their people and paid the price.  Over 28 catechists in the parish were killed, and many were captured and tortured.

Anselm was a visionary. And was also a person of great humanity with a lively sense of humour.  One of my great memories is of how easy it was to make her laugh. She loved community life and relaxing with the sisters… Once when a young postulant was driving us all crazy imitating someone, repeating a word   over and over. We all told her enough was enough, and I told her that if she did it again, I would empty the jug of water over her.  She did it again, I emptied the jug, Anselm’s response was: “Did you have to use the boiled and cooled water?”  Actually we all had a good laugh and I got thoroughly splashed too!

Celebrating her 90th birthday reminded me of another of her birthdays. She was tidying up some coke bottles and stepped on a scorpion.  Of course, the scorpion did what they do best.  He arched his tail and stung her in the foot.  This was very painful, although it would not kill an adult.  She suffered temporary paralysis so she had to lie on her bed.  Our parish priest, Alfredo, came to see her bring a bible, candle and acolytes.  She found the strength to throw her pillow at him!

Anselm was creative and full of bright idea.  I sort of cringed when she began a sentence with “I have had a brilliant idea!”  I never knew what would come next.  It could be “we have a few hours off, let’s clean this place from top to bottom”, or “let’s have a regional assembly organized, run and presented by the youngest sisters. “Or “how about opening another house in Honduras or Guatemala.”  She was not afraid to listen and to change.  Nor was she afraid to take risks, physical or any other way.  I can still see her running when a hail of bullets seemed to erupt where our jeep was parked.  But she was running towards the gunfire, we needed that jeep!!!  Everyone else hit the floor, but she went to move the jeep. Her energy was boundless; nothing was too difficult if it would benefit the people.

She was eminently human.  I remember when we built a sort of bunker to shelter in when the firepower was zooming over our house. She was a tall lady, and a bit claustrophobic, so she refused to crawl in head first.  So, there she was her feet safe and her head sticking out as an easy target for any stray bombs or bullets!

She knew Monsenor Romero personally, and had the joy of knowing that he was recognised as a saint and canonized. She hoped that our many murdered catechists would someday be raised to the altar.

She lived in historic times and contributed to that history.  She saw the end of the armed conflict in El Salvador, and moved to Guatemala which was still at war.  She saw the murder of another bishop, Juan Gerardi. She accepted the challenge to begin again and showed the same passion for justice and unflagging zeal. There too she was loved and appreciated.

Anselm found it difficult to return to Ireland. She missed her people, the music, the language, even the struggle. It was difficult, but she accepted what the Lord asked of her. She kept in touch with Central America, translated papers and letters, and even translated a book on the rule of Clare from Italian to Spanish.

When I wrote to a friend to tell of her passing I ended the note with:

“May she rest in peace.” His response was, “And may she rise again in glory.”

So, go in peace, Anselm, to join your parents Harry and Flora, your sisters,  baby Valerie and Madeleine, brother in law Blair, Monsenor Romero, Peter and Jean, all our catechists and the cloud of witnessed who await you. Go in peace, Anselm, and may you rise again in glory. 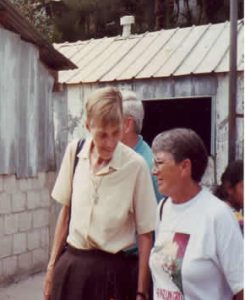