Very early in the morning on the 26th Sunday in Ordinary Time we set off full of excitement and expectation… what would this day hold in store for us? We boarded the Ministry of Caring transportation vehicle and set off for the first leg of our journey to the train station!! Philadelphia, the city of sisterly and brotherly love, had been in lock down for the whole week as it prepared for the hundreds of thousands of people expected to attend the Solemn Mass to mark the closing of the eighth World Meeting of Families. As we drew closer to the city, the atmosphere intensified as well as the security. My specially packed lunch was trawled through and my golden delicious apples were confiscated, much to my dismay, as they were deemed to be possible missiles! ‘Soft fruit only, Ma’am!’, I heard!! Once we got through all of the essential searches we headed with increased fervor to our destination. Exhausted already, we were truly ecstatic to be able to set up camp for the next 13 hours at one of the many the barriers lining the possible route of the Pope Mobile!

Having navigated ourselves thus far we settled down to enjoy the spectacle. We were thrilled to watch the zillions of security people prepare and scan the area from various vantage points as well as watch the development of the Holy Father’s day in advance of getting to us on one of the 40 big screens scattered around the mall! WAWA’s supplied endless water and our security man supplied endless entertainment as people crossed the road to negotiate the toilets!!!!! It was fantastic…

The crowd multiplied minute by minute and all of a sudden there seemed to be a sea of happy people of many Faiths and none sharing these special moments of anticipation. Saint Pope John Paul’s initial reasoning for initiating this special World Meeting of Families Event was to increase the sacred bond of families across the world. You could certainly feel a strong bond in this crowd of pilgrims, this family of Faith, who were/was waiting to hear the Holy Father’s words of compassion and wisdom at this joyful celebration of love and support. 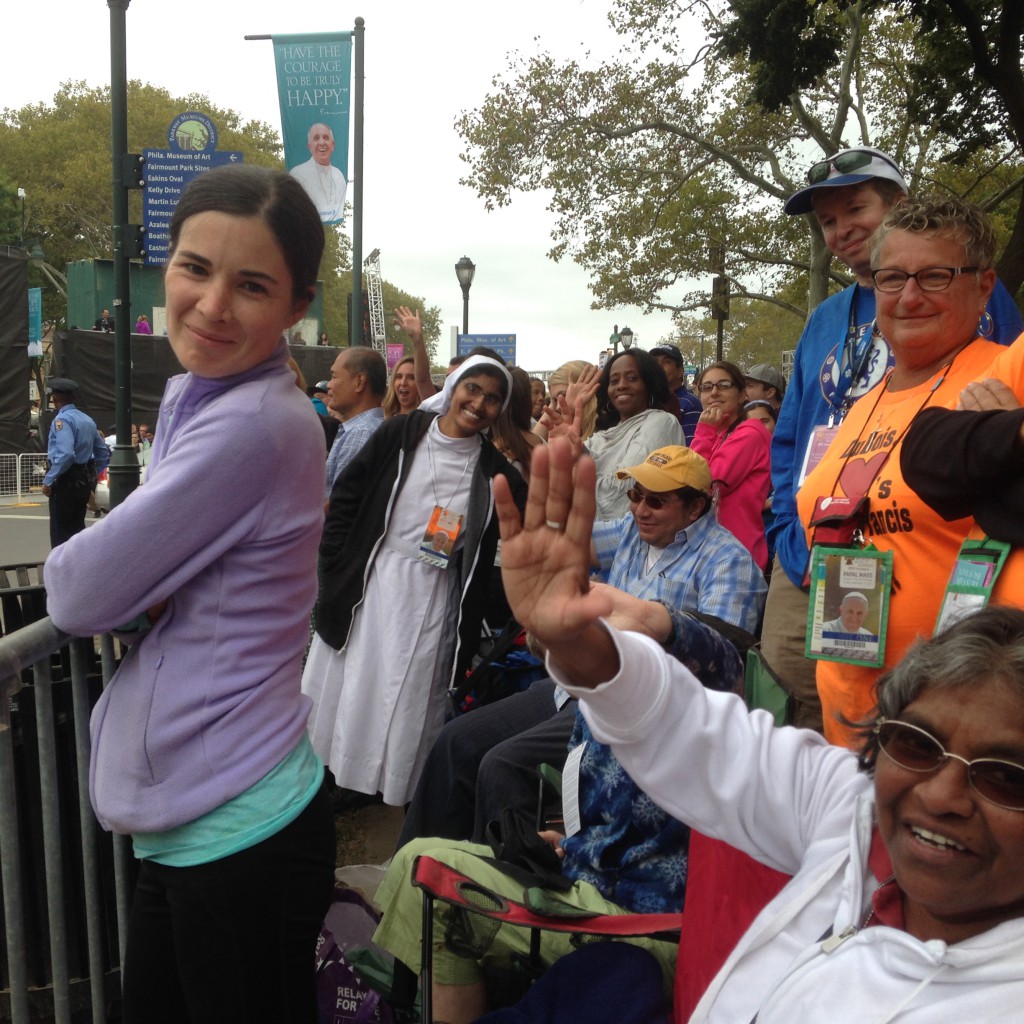 When his helicopter flew over the Benjamin Franklin Parkway the crowd erupted!! His arrival among us was imminent…

I felt like we were walking on the road to Emmaus, our hearts were burning within us as we counted the minutes down… we were going to see him face to face.. we were about to listen to and see one of the most popular and magnetic world leaders of the past century!!

The choir practiced on and the people pushed forwards and suddenly he appeared…. This was indeed a moment of grace!

The cavalcade of cars slowly manoeuvred around the route as people cried, clapped, shouted, frantically passed babies forwards, prayed mantras and the Rosary and positioned mobile phones in the hope that they would get a picture of him!

When he came into sight he was smiling, he was spontaneously doing his own thing- reaching out for babies and stopping to connect with those who were lucky enough to catch his attention! A little 5 month old in a mitre stopped him in his tracks and the BABY BISHOP was quickly passed over heads and gently handed to a Secret Service man close to me and placed in the arms of the loving Holy Father! What a Kodak moment for the parents!

Within ten minutes the entrance procession began… it was indeed a spectacle. There was a reverend hush during the celebration of the Mass as we waited to hear the Holy Father’s final words to the US nation (and the world) in his homily.

Pope Francis spoke simply… he reminded us that ‘Faith opens a ‘window’ to the presence and working of the Spirit.’ He told us that ‘ holiness is always tied to little gestures. These little gestures are those we learn at home, in the family; they get lost amid all the other things we do, yet they do make each day different. They are the quiet things done by mothers and grandmothers, by fathers and grandfathers, by children, by brothers and sisters. They are little signs of tenderness, affection and compassion. Like the warm supper we look forward to at night, the early lunch awaiting someone who gets up early to go to work. Homely gestures. Like a blessing before we go to bed, or a hug after we return from a hard day’s work. Love is shown by little things, by attention to small daily signs which make us feel at home. Faith grows when it is lived and shaped by love. That is why our families, our homes, are true domestic churches. They are the right place for faith to become life, and life to grow in faith.’

He pointedly challenged us to reflect on how we were living in our own homes and in our common home! He advised us that the urgent challenge of protecting our home includes the effort to bring the entire human family together in this pursuit. He asked us to ensure that the children in our lives would see in us ‘models and incentives to communion, not division!’

In a crowd of over a million people, you could have heard a pin drop when he forcefully said, ‘Would that we could all be prophets! Would that all of us could be open to miracles of love to benefit our own families and all the families of the world, and thus overcome the scandal of a narrow, petty love, closed in on itself, impatient of others! I leave you with a question for each of you to answer – because I said the word “impatient”: at home do we shout at one another or do we speak with love and tenderness? This is a good way of measuring our love.’

He left us much food for thought for the journey home………..

At the end of his homily, following a time of silent reflection, the pilgrims responded with rapturous applause! Pope Francis does not mince his words! 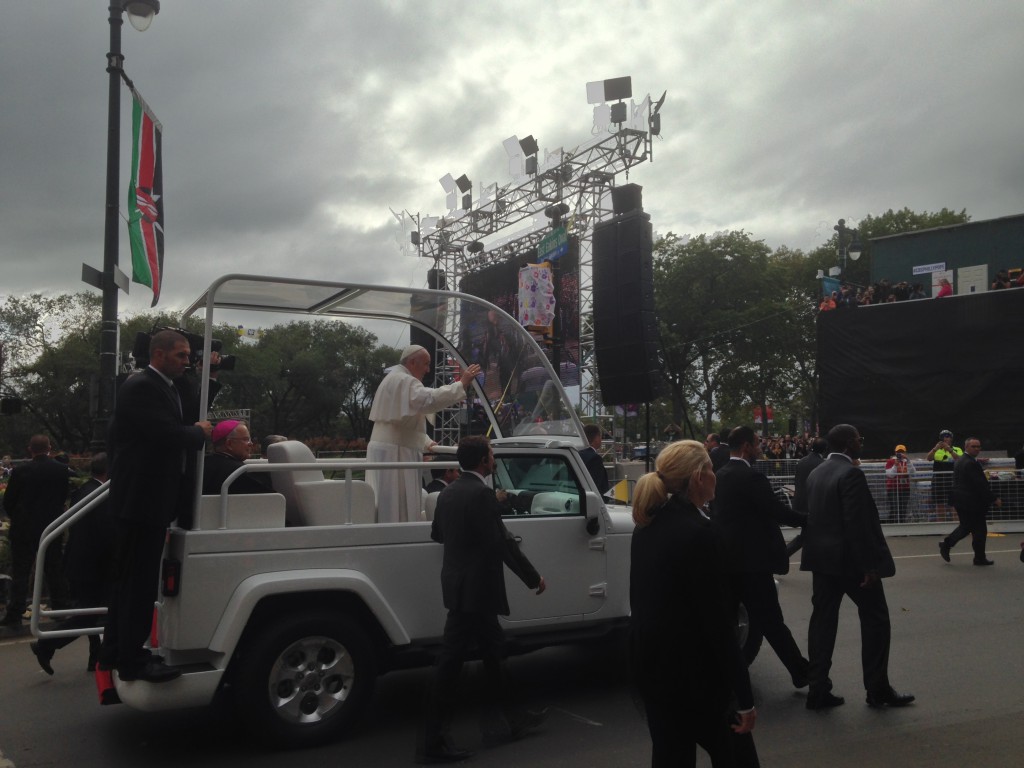 The Mass continued. It was indeed a spectacle to see the Eucharistic Ministers, priests and deacons from all over the world, accompanied by Knights of Columba and other volunteers disperse into the crowds of hungry pilgrims…

Following the prayers of thanksgiving and the votes of thanks…there was an announcement which was indeed music to my Irish ears……. Most Reverend Vincenzo Paglia, President of the Pontifical Council for the family, announced that the 2018 World Meeting For Families would take in………. Dublin!! I was so excited!! Yippee!!

The Holy Father concluded by greeting a Syrian family and giving them the monetary collection from the crowd. He gave them the money as “a sign of our love and our closeness to these people and for the city… May peace come to Syria” he said.

Humbly he concluded by asking us not to forget to pray for him!

Amidst cheers and whistles following the final blessing he was gone and by the time we had navigated our way through the people now homewards bound, we could see him on the large screen in Philadelphia airport embarking on his last leg home to the Holy City!

Exhausted, we plodded on to the station with joy in our hearts, so very proud to be Christians and ‘fully alive with the joy of the Gospel.’ There was a feeling of determination not to let his words evaporate… ‘Prayer and Action… Let us grow in Faith.’